Since the spring of 2018, The Cycling Club at UGA has been partnered with Bike Athens. At least once a month, members visit the brick and mortar location to clean and service bikes that are donated to local children from underprivileged households. Community involvement is an integral part of the club's mission and we are proud to provide over one hundred hours of service per year. 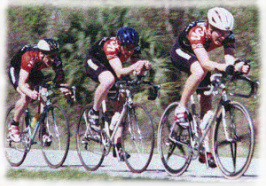 The club was founded in 1988 and attended the first Collegiate National Cycling Championships in 1989 at Colorado Springs, CO. Since then, the team has encountered many other successes in inter-collegiate Cyclocross, MTN, and Road cycling at both conference and national levels.
The club has been student run since its inception. The Cycling Club at UGA is one of 44 clubs that operate out of UGA Club Sports administered by the Department of Recreational Sports. Although not a varsity sport at UGA, the racing members of the club compete in nationally sanctioned inter-collegiate events as well as events outside of the collegiate conference. In addition to competitive endeavors, the club promotes cycling as a healthy recreation for the student and employee community at UGA.

Many professional cyclists and lifelong cycling enthusiasts alike got their start in the UGA cycling club. The club is open to the entire UGA community, however eligibility for competition requires enrollment in an undergraduate or graduate program. Club alumni have gone on to become successful teachers, scientists, artists, coaches, doctors, attorneys, psychologists, career students, entrepreneurs, business men and women and other contributors to society.